Until I worked with Thai chefs I thought Tom Yum soup was Tom Yum soup. There are actually many variations; all different and delicious in their own way. Now here’s a quick Thai lesson as I see it:

Here is my recipe for my favorite Thai soup, Tom Kha Goong, or spicy prawn and lemongrass soup with coconut and mushrooms. Feel free to use chicken stock but I actually prefer to shell the prawns and use the heads and shells to make my own prawn stock.

You can’t get much more old school than brawn. If you haven’t tried it you’re really missing out, just don’t be put off that it is essentially a jellied boiled pigs head. If you don’t want to make it with the other accompaniments then you can serve a big slice of it with some crusty baguette and chutney. 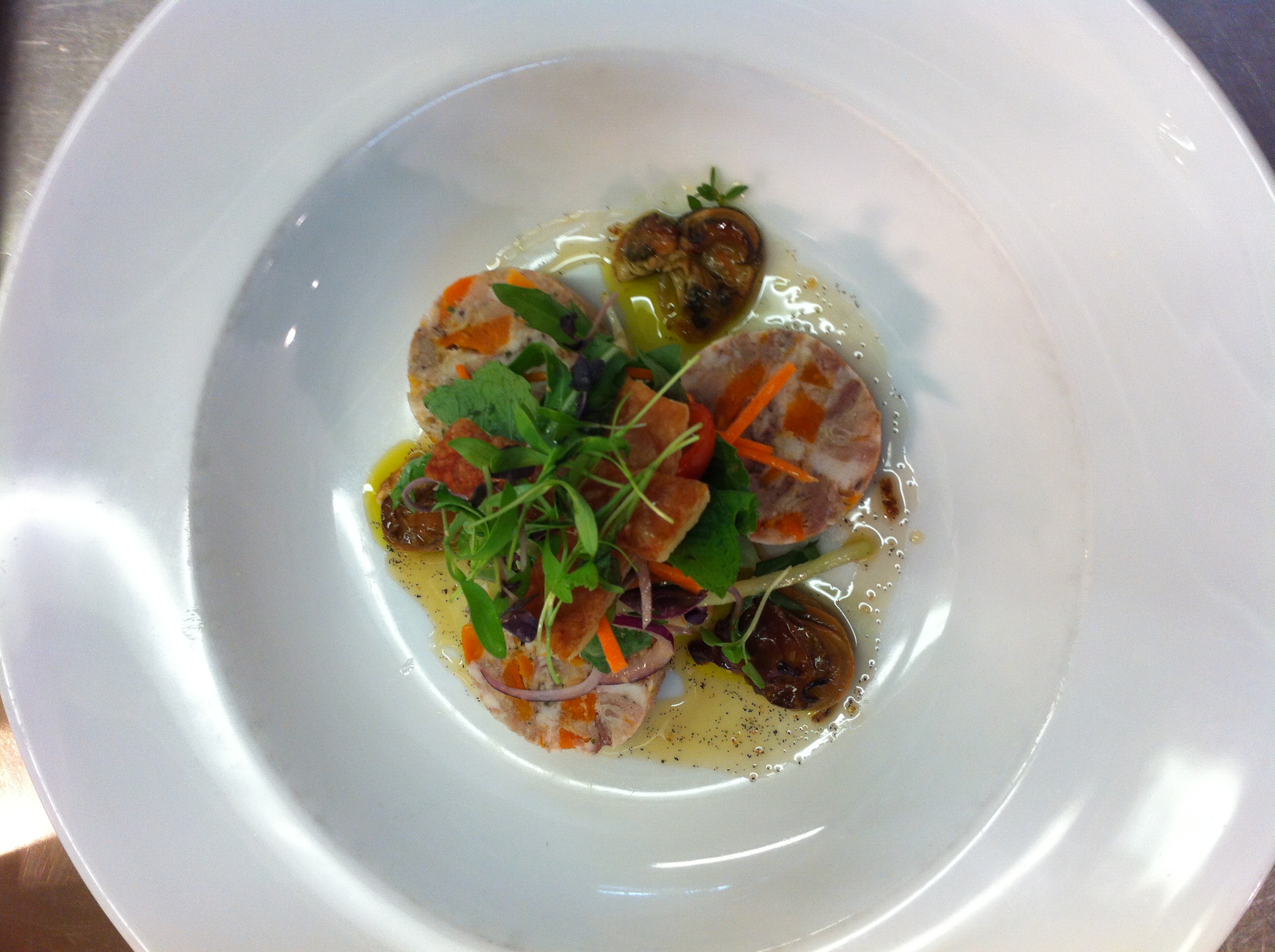 Why I love Thai food

As I sit at the over water bar on my day off, computer on my lap and cocktail in my hand, I turn to my wife and ask what “would you like to do for dinner?” This is always a big decision for me and sometimes drives my wife up the bend. Despite what most people think about chefs, I am not a fussy eater, I will try almost anything and enjoy any food no matter how simple or humble if it is done well. Deciding what to eat sometimes can be a big decision; sometimes it’s all so good! “Let’s have Thai” my wife responds and I happily agree.

I am all about Thai food right now and have always appreciated it since trying “real Thai” during my first posting in Asia. When at Pacific Regency hotel in KL I had the pleasure of overseeing a Thai restaurant. Luckily for me the whole Thai kitchen brigade were Thai and were led by a very talented cook Alex (real name unknown). Most of the experiences I had (thought) I had with Thai food back home had actually been watered down and “westernized” versions of stock standard Thai staples. Often cooked by non-Thai and executed poorly.

Why do I have such a soft spot for Thai food? Perhaps it reminds me of good times. It’s fresh and spicy with clean, vibrant and clearly defined flavors;  many things that many great dishes aspire to be irrespective of style or country of origin. It has appeal to everyone, whether sitting in the fine dining Thai restaurant on the 23rd story of my old hotel in KL with my then girlfriend (later my fiancee then wife) or sitting with old friends in a car park on cheap plastic tables and chairs in Bangkok it’s just so goddamn enjoyable. Apparently there’s a chemical in chili’s which react with the receptors in the tongue the same way as heat (no shit) and register as burning, this pain causes the body to release endorphin’s. So it’s fresh, spicy and gives you endorphin’s… what more could you want?!

Here’s a preview of the upcoming E-book. For this particular recipe I used  Leelands lamb shoulder racks. Leelands Lamb is run by Bill French in Invercargill, New Zealand and in my opinion their lamb is one of the best in the world. Here I have used a lamb shoulder rack and cooked it pink. Unless you have a very high quality lamb shoulder then I would suggest you use a traditional lamb rack for this.

I was reading an interview with a chef recently who when asked for his favorite quote replied “you can’t polish a turd”. Despite bringing to mind the Coogee Bay Hotel saga (go on, Google it) in my opinion he’s right. And wrong… It’s near impossible to take something that is bad quality and make it into something fine dining but what is the definition of a ‘shit’ ingredient? Too many people equate high quality with the choice cuts, the expensive parts; so much of the definition of what is good and bad is dependent on what is in fashion at the time. What makes a fillet for example ‘better’ than a trotter or the tail, because it’s fast or easy? If you go back a while lamb shanks were discarded or animal food, in the 90’s lamb shanks were on everyone’s menu. The same can be said about oxtail and pork belly, although some things like tripe have never come into the mainstream of what is cool. I think there has been a fascination towards the ‘nasty bits’ as Anthony Bourdain has put it; that which was made edible through invention born of necessity many years ago has become somewhat desirable. Take for example the popularity of St. Johns and the nose to tail books.

Cooking is all about transformation. In its simplest form it is the transformation of something inedible to edible through the direct application of heat. When our ancestors discovered fire and the most rudimentary forms of cooking it’s what allowed us to have a high protein diet and made our brains grow bigger (so I’m lead to believe). Anyone can take a piece of beautifully marbled prime beef fillet and with the most basic of instruction produce something sellable. Taking something that most people would normally throw away and turning it into something delicious that people would pay a premium for is where the true skill lies (and also helps the bank balance). A terrine made of all the odds and ends that normally end up in the bin can be a thing of beauty. Where is the skill in taking something already great and turning it into something that is equally great. If you have the most amazing ingredients then why bother transforming them at all? A beautiful piece of freshly caught Tuna or Salmon, all you need to do is slice it and put it on a plate, is it really any better after you’ve seared the edges? That comes down to someone’s personal taste but if you cook it to well done surely it is ruined.

Using “bad” ingredients is good for the world. I hate to think how much food is put into the bin every single day. If anyone thinks that wastage doesn’t matter they should read the chapter in Thomas Keller’s French Laundry entitled “the importance of rabbits”. I read that and couldn’t agree more. I think people are blasé about throwing food in the bin because it has become all too easy, there’s no work in making food anymore. I know of someone who was a “vegetarian” but would eat meat if it was ground into mince but refused to touch it without gloves, but was then quite happy to ingest it. No doubt well done and with an abundance of processed tomato sauce. How did we become so disassociated with where our food comes from?

Food is what comes out of the box and into the microwave, chicken is what you get skinless and boneless and vacuum packed in the poultry section of the supermarket. I wonder would you think twice throwing away that drumstick if you had to grow the chicken, feed it for months, pluck it and had to have looked it in the eye as you brought down the axe…? But that’s the reality, animals need to die in order for us to have the pleasure of eating them and the very least we can do is have the respect to make sure we use every part. And in today’s economic climate with people concerned about increasing costs and decreased revenue as a chef it also makes economic sense.